Skip to content
Would you like a free copy of my e-book, Importing Democracy, and be notified of any new blog posts? Just fill out our form and the book will be sent right away! 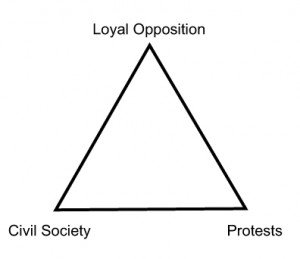 Part 1 of this blog dealt with the streets protests occurring everywhere, organized by social media.   The second corner of the democratization triangle is civil society. There are two major questions about this corner of the triangle, in any country:

1) How strong and dense is civil society?

In many countries, such as Libya, the Arab Spring led to a proliferation of new civil society organizations.  But these new Libyan organizations have to compete with armed militias tied to political leaders.

Unless protests are linked to a strong civil society, they don’t often work.  In March 2006, for example, street protests organized online in Belarus against Alesandr Lukashenko’s vote rigging failed. On the other hand, in 1989 much of the political leadership in Eastern Europe collapsed in the face of strong, dense civil societies with many horizontal ties, even though social media was still in its infancy. Foreign Affairs

The positive relationship between the development of civil society and democratization has been the subject of numerous essays.  Civil society as defined by Victor Perez Diaz includes markets, associations and a sphere of public debate. Markets include everything from micro-enterprises to small businesses to large corporations.  Associations encompass labor unions, religious organizations chambers of commerce, development NGOs and the democratization NGOs that I studied in my book.  The sphere of public debate includes not only media, but also the ways in which citizens communicate with each other.

The sphere of public debate that emerged in the coffee houses of 18th Century Europe contributed to the creation of civil societies. Clay Shirkey contends that censorship of public speech and communication among citizens is more damaging to democratization than censorship of outside sources such as google. If, then, social media can be utilized to strengthen the freedom of assembly and public conversation, as well as freedom of the press, it has a good chance of helping to sustain democratization. Democratization NGOs in South Africa, Tajikistan and Argentina all support different forms of public conversation and deliberation in local communities.

But how do demonstrators organized through social media connect to the associational component of civil society? That may be the most difficult challenge for demonstrators. Not only are civil society organizations, particularly democratization NGOs, thinly spread in many countries, they also face a lack of funding and state repression. The leaders of civil society organizations are easier for authoritarian regimes to target than individual protesters organized through social media.

So it may be that social media should begin to focus, not just on protests, but also on how to link protesters to civil society—even if it is not yet dense. They can do this in two ways. First, Associations—including democratization NGOs, need to reach out to a wider constituency. In most countries, protesters are not even connected to civil society organizations such as labor unions, much less to democratization NGOs. Second, by expanding the definition of civil society beyond associations to businesses and the sphere of public debate democracy advocates may find that there is more going on in their own countries than they imagined.

2 thoughts on “The Democratization Triangle, Part 2: Can Protesters Build Ties with Civil Society?”